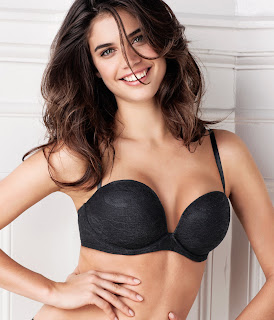 Shot from H&M Campaign
She was a really good student.
We have the same rating in high school, so many thing on common :)


Lunch Talks with the Models: Sara Sampaio (Women Direct NY)
Damian Bao: Hi Sara, please introduce yourself. How old are you? And where are you from?
Sara Sampaio: I am 20. I will be 21 on July 21st. I am from Porto, Portugal.
Damian Bao: How were you discovered?
Sara Sampaio: I won a modeling contest in Portugal, and then I got signed with my mother agency Central Models.
Damian Bao: Were you a good student in school?
Sara Sampaio: Yes, I was an amazing student. In Portugal, the rate is from 0 to 20, I finished high school with a 17 out of 20. And I had straight A’s in math.
Damian Bao: What has been the most memorable moment(s) as a model for you?
Sara Sampaio: Walking the Blumarine Spring/Summer 2012 show in Milan. It was my first and only big show. I was next to many big models that I haven’t met until then. It was exciting. I also love shooting. I had a lot of fun shooting the Blumarine FW 11.12 campaign with Adriana Lima and the Armani Exchange campaign. They were a lot of fun!
Damian Bao: Which model from the past has inspired you?
Sara Sampaio: I love Kate Moss because she is amazing, and she is smaller than me so that is inspirational! She has become so successful even though she is also short.
Damian Bao: Do you have any goals for the future?
Sara Sampaio: Yes, any goal that any model has! I would love to walk the Victoria’s Secret fashion show, and become an Angel. I would love the chance to walk all the big high fashion shows. I would love to shoot those campaigns too. I would also love the opportunity to work with all the major high fashion magazines. I think that every goal that every model should have, I would also make them as my goals too.
Damian Bao: Wow! Sounds good!
Sara Sampaio: Yeah!
Damian Bao: Thanks Sara!
Sara Sampaio: You’re welcome. =)